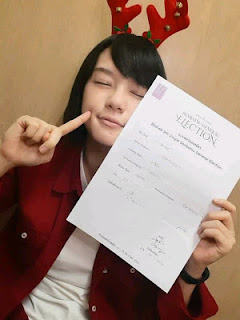 As we've been reported that BNK48 next general election will be held in March and includes all of CGM48 Chiang Mai members in it for the very first time.

Some BNK48 members have also submitted registration following their participate including Cherprang Areekul.

Unfortunately, there's some issues regarding her candidacy in this edition of BNK48 Senbatsu Sousenkyo.

Last year's BNK48 General Election, Cherprang has promised not to participate in the next SSK so that other members can actually have a bigger chance to win the trophy or entering senbatsu position.

But there's the problem, Cherprang suddenly posted her own pict with a Sousenkyo form with an unusual face expression in the photo.

Cherprang was then make a live broadcast on iAM Official App, spokes out that making fans split over management treatement over her and they can't believe this is happened.

She (Cherprang) has been forced to participate in the next year's Sousenkyo by iAM and AKS representative to retain the winning title.

Cherprang then crying and speechless in the front of camera. Here's summary over her speech during stream: 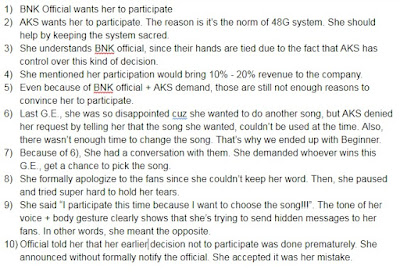 BNK48 really wanted Cherprang to participate, so was AKS. They're both using 48G system as a reason to forced her.

Shocked fans split over by AKS role in this case, Cherprang been told her participation could have bring more revenue to the company. Money talks!

That reasons can't convince her enough.