BNK48 2nd Senbatsu Sousenkyo will be held in March 2020 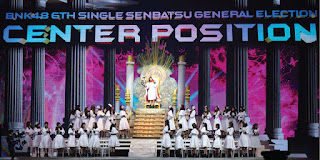 On the second day of BNK48's seventh single handshake yesterday, it was announced that this idol group will hold a second general election or 2nd Senbatsu Seosenkyo.

Even though this event is still long awaited by the fans because it is present in the past two years.

To welcome the election, BNK48's 8th single which will be ordered in February has been equipped with a 1-ballot vote ticket.

You can choose your favorite members to be included in BNK48's 9th single senbatsu later.

Just like AKB48, the election at BNK48 also applies a period of registration conducted by each individual in a transparent and without coercion.

The 9th single general election December 13-25 2019 will be the application period for candidates in sousenkyo.

As we know BNK48 already has a younger group, CGM48 in Chiang Mai.

However, it is not certain whether CGM48 members are allowed or will make their own sousenkyo.

This refers to the SNH48 election which included the sister groups of BEJ48 and GNZ48 which were born at the time.