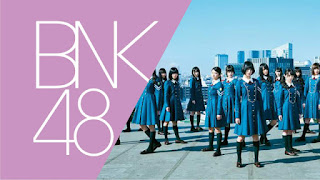 A Weibo account of the BNK48 fan club in China uploaded leaked information for fans.

The account @BNK48-CHINA on Weibo states that BNK48 which is a sister group of AKB48 in Japan are allowed to use the songs from Sakamichi Series.

Of course this post are reaping the pros and cons. 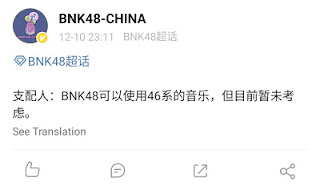 "Management: BNK48 can use music from the Sakamichi Series, but it is not currently being considered.", Writes BNK48-CHINA.

The account uses the name of management as if this is true news spoken by the insider of official BNK48.

However, it is not certain whether this news is true or false.

Until now, BNK48 is still adapting a series of songs from AKB48 in Japan and making their own original songs.

BNK48 itself has not officially said this.

Sakamichi Series is a unitary group of the idol group Nogizaka46 and its sister groups (Keyakizaka46, Hinatazaka46, Yoshimotozaka46).

Nogizaka46 is a rival or rival of AKB48 under the same producer Yashushi Akimoto.

This is the problem because Sakamichi is not part AKB48 GROUP despite Yasushi Akimoto's girls.