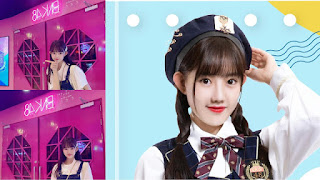 Li Hui, a member of CKG48 who is under the auspices of IDOLS Ft, is apparently on a vacation to Thailand.

Through her Weibo account, she was enjoying the weather in Thailand which shee said was quite good.

Yesterday, Li Hui through her Weibo account  told fans that she was in Bangkok.

This is known because Li Hui uploaded a photo showing BNK48 The Campus. 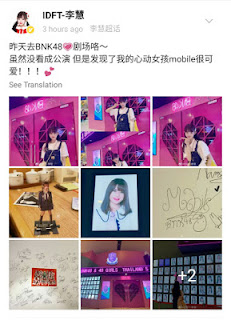 "I went to the BNK48💗 Theater ~ Even though there were no shows, but I found my beloved girl Mobile, she was very funny! !! !! "," Wrote Li Hui, who was followed by an upload of a photo of herself at BNK48 The Campus.

This was in fact not responded by CKG48 management itself.

None of the protests came from SNH48 GROUP fans. Like this, the feeling of step brotherhood is both 48 Family but different from parents. Li Hui added SNH48 GROUP members who are big fan of BNK48.