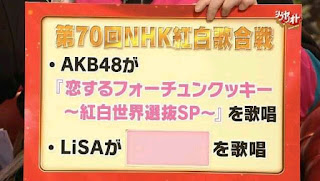 AKB48 Sekai Senbatsu might be different from WRD48 because from the body of AKB48 itself there will be several other sister groups and also this time there is a surprise that Senbatsu participation is DEL48's performance.

Of course, all the fans found out some time ago precisely in late November that DEL48 will be announced but due to various factors, DEL48's public debut was cancelled and it was also rumored that DEL48 was doing a training and training session.

It is unknown when DEL48 announced its members but there were a Rumor said that DEL48 will be introduced this month before they performing on 70th NHK Kouhaku Utagassen event.

In addition to DEL48, there is also CGM48 who has made introductions some time ago, with the presence of these two new groups, it is certain that representatives of 8 overseas groups will be present at the event, exclude MUB48 Mumbai.