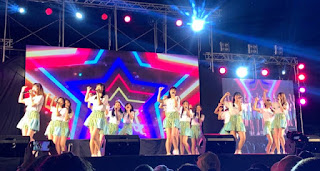 Today the "BNK48 77no Suteki na Machie e Roadshow" event has been held in Chiang Mai.

The event was attended by 6 members of BNK48, besides the sister group of Chiang Mai CGM48 was a surprise as a special guest.

CGM48 debuted in this event by bringing the song Chiang Mai 48 (CGM48) which is a compulsory song for 48 group and several songs such as Aikatta, 365nichi no Kamiikoouki and KFC.

In this event there were also several announcements for CGM48.

CGM48's debut single was revealed through a VTR.

Senbatsu for the first single has also been mentioned, consisting of 16 members.

The center is held by the most charming member, Sita.

Another surprising announcement is CGM48 which will be included in the BNK48 election event next year.

BNK48 9th Single Senbatsu Sousenkyou will be followed by CGM48 for the first time.