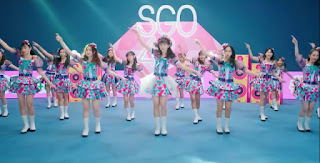 SGO48 has announced that it will release a second single titled "Koisuru Fortune Cookie" or the Vietnamese title "Thất Tình Tích Cực".

Thất Tình Tích Cực can be interpreted as "Positive Love" in English.

This single will be released on December 12th as the date the order is opened.

This single will be released in 4 types namely Type A, B, C, D.

The difference is only on the cover of the single featuring 4 senbatsu members in each type.

Types A and B will be sold in the Tiki shopping app while C&D is available at Shopee Vietnam.

In one box of Koisuru Fortune Cookie SGO48 you will get 4 entries consisting of 1 Postcard from members, 1 photopack, 1 digital download card with 4 songs and MV, and 1 handshake ticket.

4 songs in this single are Koisuru Fortune Cookie as the main song, coupling songs are Namida Surprise, Shoujotachi yo !, and 365 Nichi no Kamihikouki.

Koisuru Fortune Cookie video footage has been released, and the full version will be uploaded on December 12, 2019 on SGO48's official Youtube. Filming was held a few months ago with fans.