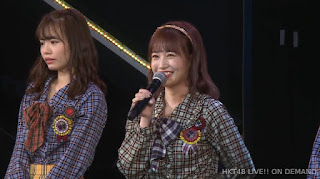 During the HKT48 Team KIV "Seifuku no Me" theater performance, Tomonaga Mio announced her graduation from the group.

Past few weeks it was known that Mio was discussing about graduation in her Showroom broadcast.

The special theater performance for graduation from HKT48 will be held on January 15, 2020.

This is very surprising for the fans because 3 more days are handshake activities with the group.

Tomonaga Mio is a 2nd generation member of HKT48 who has a pretty good career in the group.

She is known as the member with the worst votes in 48 Groups but she instead made this a joke that made her known to many fans.