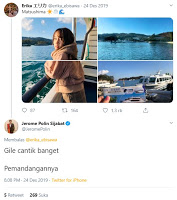 In the video, Jerome invites Erika to go to a festival in Japan.

Jerome and Erika are students from Indonesia who are studying at Japanese universities.

Because of this similarity in background, both are reportedly in the process of dating, aka approaches.

This is of course many who talk about both.

Jerome Polin and Erika also showed a little closeness in one of Jerome's Youtube videos.

Then how is the response of the netters about this news?

"I AGREE TO SIH IF JEROME WITH ERIKA DATING, SUITABLE AND RELEVANT BOTH ARE SMART", write the account @kimraraxo.

Quite a lot of netters who support if Erika is dating Jerome.