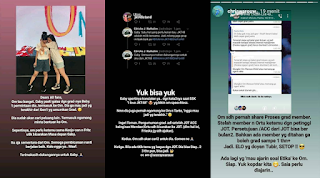 Along with the concert celebrating JKT48's 8th birthday, Beby Chaesara also gave an important announcement to her fans.

Yups, slowly Beby expressed her gratitude for being a member of JKT48.

Right at the end of JKT48's 8th birthday celebration at Tunjungan Convention Center, Surabaya, she announced her graduation.

Beby's graduation made the first generation in that idol group that left Gaby and Frieska together in Team J.

It's revealed that Frieska and Gaby tried to be the next one who graduated, they'll fight each other not to be the last first generation member to stay in JKT48.

Through his official Instagram account, Chris Warouw, a father of Gabriela Warouw (Gaby) revealed and posted an Insta Stories that Frieska has asked management to discuss her future and requesting graduation time. Whilst Gaby also didnt want to be the last first generation member to graduate.