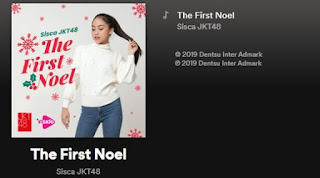 One of JKT48 member has released her first solo song.

Christmas song from Sisca JKT48 can be heard on digital music platforms such as iTunes, Spotify, JOOX, Melon Music, and others.

Sisca JKT48 released this song under the auspices of its agency dentsuXentertainment.

The First Noel is not an original or adapted song from AKB48.

This song has been sung by Whitney Houston, Pentatonix (the aapella group), Carrie Underwood, Dolly Parton, and others.

According to Wikipedia, this song comes from Cornish, first published in Carols Ancient and Modern (1823).

JKT48 has also released a Christmas song before that was delivered by Christian members in 2016.