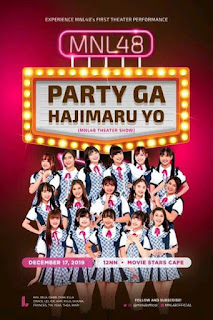 Good news comes from Manila's idol group MNL48, not about singles or other things but the news is MNL48 will hold their first theater show ever.

This immediately made the fans surprised, how could they not, so far MNL48 has not carried out the theater since its debut and the theater that was built so far was unclear.

But when this news sticks out, it certainly becomes the subject of conversation as well as good news for the fans.

Although this is only a temporary theater and is only done for a day, it makes fans curious.

Here are the details about MNL48 First Theater Preformance: Party ga Hajimaru yo