Qing Chun You Ni Season 2 uniforms has been revealed 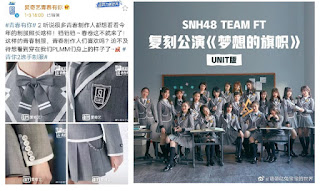 The uniform for the Chinese survival program trainee "Qing Chun You Ni 2" has been revealed.

Through official Weibo today, program has revealed the uniform that will be worn by 100 trainee girls.

This uniform was very positively responded by the citizens and loyal fans of this program.

But for SNH48 fans, this Qing Chun You Ni 2 uniform is apparently similar to the Seifuku belonging to the ninth generation members especially Team Ft.

This similarity lies in the basic gray color and in particular the uniform model.

With a similar skirt shape also adds to the impression of similarity.

The difference lies in the tie worn and the white sleeves.

This is not an important issue because SNH48 Group members will also wear this uniform and become trainees who are struggling to debut.

10 SNH48 Group members will be sent by STAR48 to become representatives of the agency.