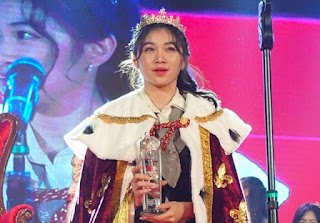 The crown as the number one member sign with the most votes JKT48 Senbatsu Sousenkyo was re-installed to the head of Shani Indira Natio, last night.

The Team KIII member collected a fantastic number of votes in the member selection competition for the original JKT48 single.

The acquisition of such votes further strengthens Shani's dominance throughout the 2019 Senbatsu Sousenkyo.

The announcement of the vote acquisition of members who entered the Senbatsu team (top 16) was conducted at the SMESCO building on Saturday night.

Beginning with Viona Fadrin's vote of 14,566 votes and placed it at number 16.

After that, it was read to the top position in a row.

At number three there is Riska Amelia Putri with 31,367 votes.

Then, Feni Fitriyanti came in second place with 44,434 votes.

First, she defeated her best vote during the JKT48 Senbatsu Sousenkyo.

At that time, she also became number one.

The second record that was broken was the highest vote during Senbatsu Sousenkyo held by JKT48 since 2014.

The previous record was held by Cindy Yuvia who was number one at Senbatsu Sousenkyo 2018.

The member who was familiarly called Yupi was number one with 68,031 votes.

Shani's mark as number one on Senbatsu Sousenkyo's selection of members for the original single JKT48 can be said to have been seen.

Since the announcement of the first and second stages, Shani has never shifted from first place.

In fact, her vote was twice as high as second.

After receiving the placard as member number one, Shani talked about a number of things.

Starting with how the struggle in JKT48 is not that smooth.

’’In this position it's not easy. Had a 32nd position at Senbatsu Sousenkyo. During the final generation 3 audition, my name was called last,'' said the member who has her birthday every October 5th.

Shani also remembers how she was sad because her efforts were not seen.

She was disappointed because what she hoped did not match reality.

In fact, Shani also claimed to have felt lonely when she had to fight alone.

"Even though I'm now in this position, standing here, I won't forget my struggles. And you (fans) who brought me here.'' Shani added.

She further said, the responsibility of being the center of the 2019 Senbatsu Sousenkyo was the heaviest compared to before.

Because, she will be in the middle to bring the original single JKT48. A dream eagerly awaited by JKT48 and fans.

As is known, since being born in Indonesia at the end of 2011, JKT48 only performed songs from AKB48 (translated).

The song that is popular to listen to right now is an Indonesian translation of the original lyrics in Japanese.

"The responsibility of being an original single center is the biggest I have ever received," she said.

Meanwhile, Team J Feni Fitriyanti who managed to finish in second place expressed her thanks to the fans who worked hard for her.

Moreover, this year's achievements are greater than Senbatsu Sousenkyo 2018.

At that time, Feni finished fourth.

"All of you helped me raise the ranking from four to two," she said on the stage.

For this achievement, Feni claimed to want to bring JKT48 even higher.

She has the desire to perform throughout Asia with JKT48.

Feni also wants JKT48 to be known as the sister group of AKB48 which is the most compact and the best dance.

Likewise with Riska Amelia Putri who managed to get third place.

She expressed gratitude for making her reach a high position even though she often annoyed fans because she rarely appeared on social media.

The member who is familiarly called Amel admitted that the position she obtained exceeded her expectations.

’Honestly, this exceeded the target at the start. Because in the first announcement I was in the 6th position, I was comfortable in the 6th position. Because, I'm from the 6th generation. This is the 6th Senbatsu Sosuenkyo. All-round 6. But it turns out I can be in position 3 for the original single JKT48." She explained.

Here are the votes obtained for ranking 1-16 of the results of Senbatsu Sousenkyo JKT48 2019: