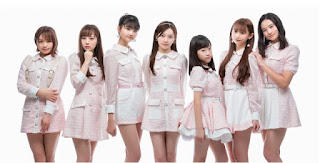 This group of 7 members including Miyuki and 6 others were chosen through an audition attended by 3,661 people.

This girl group debut was decided to be held in 2020.

The name of the group "Ange et Folletta" means "Angels and Little Devils" which comes from French.

According to the group's official website, Watanabe Miyuki explained that this group was formed but only limited to 2 years.

The logo of this group is a pair of pink and white wings with the words "Ange et Folleta" in the middle.

Ange et Folletta will make their first live appearance at the Miyuki Watanabe Christmas Premium Live 2019 on December 19 at Namba Hatch, Osaka and December 25, 2019 at Ebisu The Garden Hall, Tokyo.