A suspicious man monitored at the BNK48 Theater 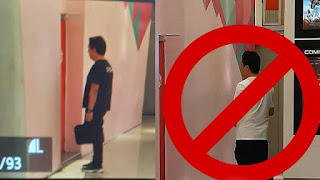 Recently, BNK48 fans were being shocked by the arrival of a person suspected of being a stalker of members.

This became viral after a fan met the person twice at BNK48 Theater.

A man whose identity is unknown is seen coming to BNK48 Theater, located on the fourth floor of The Mall Bang Kapi, Bangkok.

Fans first found him wearing the white shirt seen in the picture to the right.

He was seen directly towards the theater exit which was often used by members and staff.

"Traded the bag at the BNK48 theater. Initially came to knock on the door after that, the man returned from the bathroom and opened the door when the door was still not closed. A cafe clerk had kicked him out, and then a fan asked him why he had entered, he then responded that someone has made an appointment.", write a Save All BNK48 Member account on Facebook.

Now the staff is asking fans to better watch out the stalker if he's are back at BNK48 Theater or other group events.

This incident has been two times in a row so that fans are worried he used the bag in the second incident.