Adhisty Zara was abused by her 'former fans' in JKT48 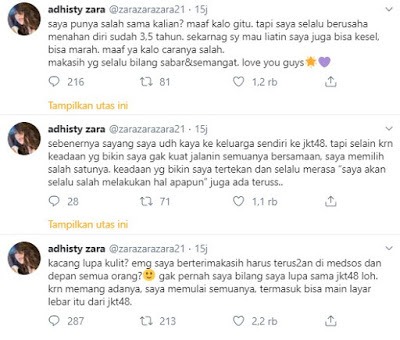 Recently, a former JKT48 member, Adhisty Zara, claimed to have been subjected to ridicule and cyber bullying on Twitter.

But who would have thought, this sneer came instead from several accounts that are known to be fans of the group that raised her name.

Zara, who was aware of the harassment on social media, revealed her complaint on official Twitter.

Zara also apologized if she had wronged JKT48 fans.

From Twitter, it is known that the cause of fans abusing Zara for her career being too short in the group.

She considered as a traitor and called as a social climbing through JKT48.

This is what makes JKT48 fans upset about her.

In addition, according to the fan' Twitter account, Zara deleted one of her tweets on Twitter which apparently provoked the fans because it contained insinuations for JKT48 fans.

Zara gets abused as those fans says "Without JKT48, you're just another disgusting K-Popers kids." with Zara's responds makes it even funnier as she said "Wo.. (pointing to Wota)." 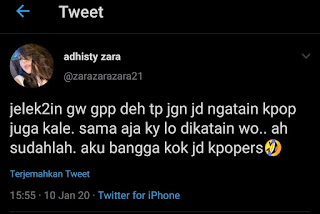 Now a lot of uploads of meme pictures on social media are made deliberately to insinuate Zara for the provocation.

Adhisty Zara graduated from JKT48 in her peak career, she once said to local media that she will never leave JKT48 only because her busyness being a movie star, that time she's taking a dig at former JKT48, Nabilah Ayu. But a month later Zara announces her graduation.