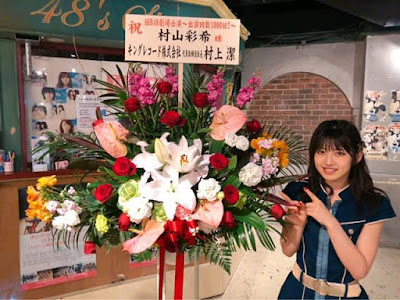 The nickname Theater no Megami or Theater Queen is indeed already fully carried by this one member.

Although she came from the younger generation, the 13th generation who debuted theater on December 8, 2011, Murayama Yuiri managed to beat her seniors in AKB48 and even in the whole 48 groups.

Murayama Yuiri is a role model for the members, where other members are competing to get into the ranks of senbatsu.

But Yuiri just wanted to appear in the theater and even she had said "Being a senbatsu is not a dream, my dream in AKB48 is to be a Theater no Megami." which is the name of the member who makes the most theater appearances.

Today, Yuiri made her 1000th appearance and after Tooku ni Ite mo, all Team 4 members sang Theater no Megami as the 1,000th special celebration for Murayama Yuiri. 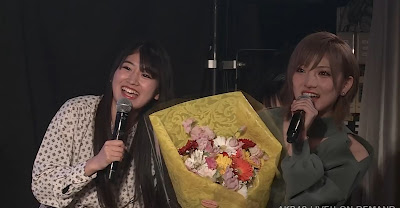 After the song ended Okada Nana (AKB48 Team 4 / STU48) came to give bouquets to her best friend.

Even though Okada Nana did not appear because she was blocked by the STU48 concert schedule at TDC Hall, but she took the time to attend after the concert to celebrate the 1000th show of Murayama Yuiri.

Murayama Yuiri was even able to defeat the appearance of her AKB48 seniors including Minegishi Minami, Kobayashi Kana and several other senior members.