They opened the voting for the appearance the audience liked the most in the event.

The results of the voting have come out, and Kouhaku's most favorite appearance last month fell to MISIA, and AKB48's rival Keyakizaka46 at number two.

AKB48 was unable to make it into the top 5 most popular appearance.

When seeing the AKB48 name in the ranking list, this group is ranked 3rd from the bottom. 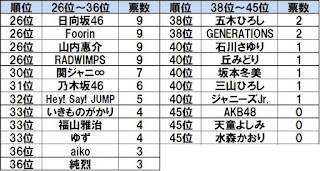 This is the worst rating obtained by AKB48 during their history fot the last decade of appearance in Kouhaku Uta Gassen.

AKB48 is trying to attract Japanese people by inviting all their sister groups including those abroad.

But apparently the song Koisuru Fortune Cookir in various languages ​​was not enough to attract the sympathy of many people.

Whereas in their appearance in the 69th NHK Kouhaku Uta Gassen in 2018, AKB48 performed with BNK48 with the same song successfully topped the top 10 most preferred performances.

But that 0 votes is still lucky for AKB, they were almost not invited to the NHK event due to the NGT48 case.

Luckily Yasushi Akimoto saved their face, thanks to a special song project. If without achievement and significant progress this year, it is impossible they will appear in the 71th NHK Kouhaku Uta Gassen 2020.

See what Yoshinari did to AKB.