Meet Vernalossom Verna Rossum the new AKS name and not managing AKB48 Group in Japan but still manage IZONE and those 9 groups from ...
AKB48, HKT48 & NGT48 will each be setting up their own new company starting March/April while AKS will be renamed as Vernalossom Verna Rossum & will not be handling any management for 48 groups but a new business instead. 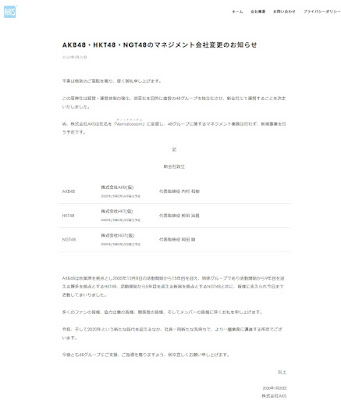 However, AKS (Vernalossom) will be withdrawing from 48 groups in Japan but "will still be managing the 9 overseas sister groups (DEL48, MUB48, BNK48, CGM48, MNL48, SGO48, JKT48, Team SH, Team TP) including those still in recruitment stage & global group IZONE".

AKS has already relinquished the other 48 groups like NMB48 (Yoshimoto) and SKE48 (KeyHolder) earlier on while STU48 (Setouchi DMO) has its own company from the start so it was only matter of time. All the 48 groups in Japan now is under different management companies even though they all have Yasushi Akimoto as producer.

'Vernalossom' combines 'Vernalisation' & 'Blossom', meaning 'blooming in Spring'. The decisions have been reported to Yasushi Akimoto and announced after consensus was reached. Company's new business starts in February 2020.