Cherprang Areekul a member of BNK48 and captain asks fans to watch JKT48 new MV Rapsodi, here what she said ... 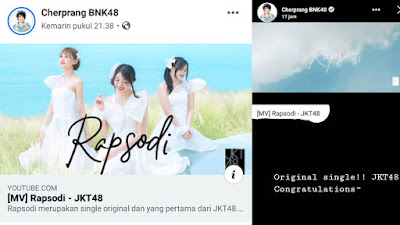 The BNK48 captain was also seen congratulating JKT48 for the launch of the first original single.

Lots of comments from Cherprang fans after watching MV Rapsodi in the comments section.

The fanz said that Rapsodi was a very good song.

Will BNK48 adapt the Rapsodi song in the future? As we know, BNK48 itself has many original songs and is well accepted by the Thai people.