BNK48 Cherprang will be in charge for 3rd generation audition 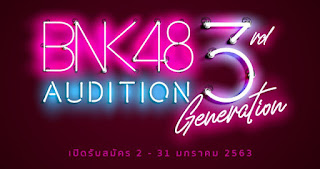 At the BNK48 "Waiting Stage" theater performance, it was announced by the group general manager Jobsan that they are about to hold audition for the third generation members.

Auditions have officially opened today, January 2 to January 31, 2019 for the online application stage.

This third generation audition has been carried out according to the management plan to be held in 2020 because 2019 will focus on the selection of CGM48 members.

In this audition, applicants are required to be girls aged 12-22 years and don't have a contract with any entertainment agency or company.

Have a soul of patience, perseverance, and receive training.

Desiring to specifically perform in the theater at BNK48 the Campus.

Can move to BNK48 hostel in Bangkok.

Applicants can come from Thailand, for foreign applicants not a problem but must follow the requirements above.

Previous audits of BNK48 accepted many applicants from neighboring countries such as Cambodia, Laos, Myanmar, Japan and Indonesia.

Candidates must maintain confidentiality, do not reveal yourself as candidates.

If a leak is found, it can be immediately disqualified.

After submitting an application, applicants must open a variety of social from being privatized into the public.

It is possible for the judges to check your social media.

Cherprang as the captain of BNK48 will be included to finish the audition this time.