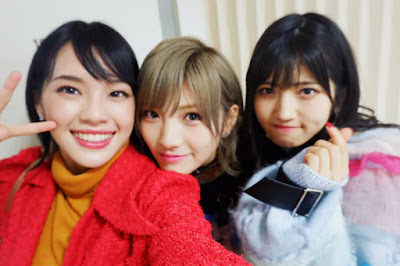 Member from BNK48 Cherprang Areekul are known to have been in Japan lately.

Through her Instagram account, she uploaded a moment to eat with Taniguchi Megu and Haruka Kodama, former HKT48.

But apparently her trip in Japan was also in order to watch the AKB48 concert.

She went to watch the AKB48 member solo concert which was held yesterday at the Tokyo Dome City Hall.

Fans of 48 Groups in Japan are very hysterical with the concert of two best friends.

They managed to amaze with a magnificent, dramatic and romantic appearance of course.

Even in yesterday's concert, there was a stage drama interlude about love stories.

She also took pictures with Okada Nana and Murayama Yuiri. "Filling up energy, Yuiri and Nana's concert. I really enjoyed their performance!", Wrote Cherprang in her upload. Cherprang even wrote the hashtag #love in her post.