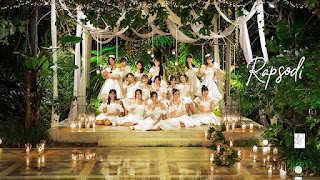 This page also explains the details of JKT48's Rapsodi single.

As usual, JKT48 will release a single in two types, physical EP and music card.

In the physical EP version, the single Rapsodi will be filled with 1 CD with 5 songs, 1 DVD and 1 random photopack.

For the music  card version, you can choose the type, which is a song that consists of two Rapsodi and Sweet & Bitter or a special photo of Rapsodi during a MV filming, plus a handshake bonus ticket.

This single contains 5 songs with "Rapsodi" as the Main song.

The coupling song by Undergirls is "Sweet & Bitter".

The other three couplings are prize songs for the TOP 3 original single member selection.

"The Despicable Dream / Gesu na Yume" by Feni and Gaby.

The song "Who Made Us Together Meet? / Dare ga Futari wo Deawaseta no ka?" by Amel, Ariella and Tasya.

Pre-order can be through the JKT48 Official Web Shop or at the JKT48 Theater with the option to schedule a handshake for January, February and March for the music card version.