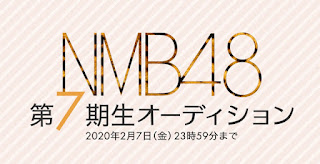 NMB48 officially opened the seventh generation member audition through its website on January 1, 2020.

Previously the announcement of the holding of this audition had been delivered at a special new year theater performance as well as the 9th anniversary celebration of the group at the NMB48 Theater.

The first stage of the online application for auditing was officially opened from January 1st to February 7th, 2020.

The requirements for this audition are girls aged 11 to 22 years on February 7.

Not tied to any entertainment company.

Audition registration can be done online through the NMB48 7th Audition website, or through the form provided by NMB48 at Namba Sennichimae, Chuo-ku, Osaka 542-0075, Osaka Prefecture.