Here is more details on Real Me BNK48 second documentary will be finally on theatre next month ... 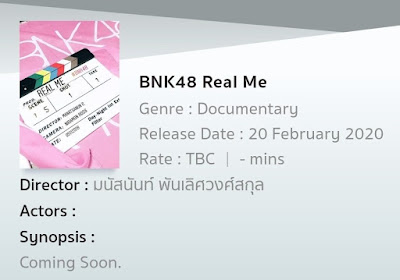 As BNK48 has scheduled at the "We Talk to You" event in 2019 that the Thai group will release a second documentary titled 'Real Me'.

However, the release scheduled for September 2019 finally postponed.

Until now there is unknown the cause for the delay in the release of BNK48's Real Me film.

But one of the official cinema sites in Thailand, SF Cinema City has revealed the release of the second documentary film BNK48.

As reported on the official website, BNK48 Real Me will be scheduled to appear in theaters on February 20, 2020.

Though filming is known to have started since November 2018.

He is an actor and film producer in Thailand.

Real Me cinematography is handled by Niramon Ross, who is quite well known in the film industry. He also became cinematography for the first BNK48 documentary film 'Girls Don't Cry'.