Jane and Wee BNK48 is a couple in a drama

Drama.starring two BNK48 members Jane and Wee is now a trending topic, here is why ... 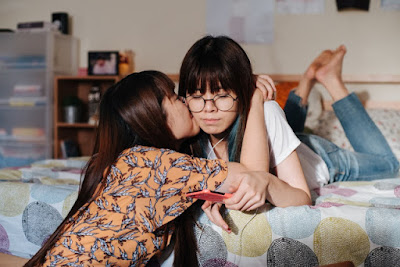 On January 23, 2020, a drama series starring BNK48 members was airing for the 8th episode.

But that night there was one scene that made the audience very happy.

In the series both are lovers.

Fans did not expect and at the same time were happy to finally have a unique couple in this trending story series in Thailand.

Even though the plot from the beginning was highlighted by the romance of a character starring Pun, Cherprang, and June BNK48.

At that time Pailin was eating with her family members.

Her parents immediately asked Wee explicitly about something they were suspicious of.

"Does Pailin have a Girlfriend", ask Pailin's mother as in the video.

Pailin, played by Wee, answered yes because she had the support of her parents.

Apparently Sai came to visit Pailin to her house and played in a room together.

She told Pailin that people in the house already knew that the two of them were dating.

Sai, starring Jane BNK48, was very happy because she did not get any rejection from Sai's parents.

Because happy, Pailin immediately took Sai who was on the room Check out the full story by watching the complete series on TV Line Thailand.