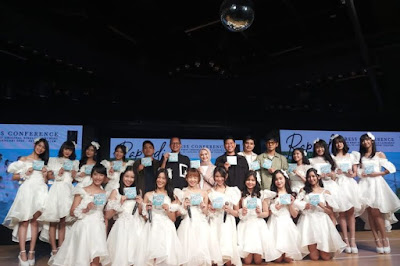 The long wait for JKT48 has ended eight years.

Because, the idol group formed since 2011 finally released their first original single.

The original song launched by JKT48 was titled "Rapsodi".

"Rapsodi" tells of a process of love leading to the promise of loyalty, namely marriage.

This song was created by Lale, Ilman, and Nino.

While the choreography was worked on directly by Ari Tulang.

In addition, there were 16 JKT48 members who were involved in the single "Rapsodi".

Therefore, according to the woman who was a member of the first generation JKT48, the original single was a pride for JKT48 fans, Wota.

"This song is easy listening and really Indonesia, so hopefully it can be accepted," she said.

2. Cannot chant In the song.

The musical accompaniment sounds different compared to the previous JKT48 song which was energetic and vibrant.

Songs and lyrics "Rapsodi" including mellow or soft.

Melody revealed, it was done because it adjusts to the color of music in Indonesia.

"This time it really can't chant, we adjust the music in Indonesia," Melody said.

She added that the different colors displayed "Rapsodi" could give something new to the Wota.

According to one of the creators of "Rapsodi", Anindyo Baskoro or better known as Nino, he was confused at the request of the creative team.

"We talked with the JKT48 team and one thing was the request of the JKT48 team if they wanted a wedding bell. It's so confused, when it's ready, we create lyrics and music." said Nino.

He hopes the song "Rapsodi" can enter the song list on Indonesian radio.

"Because JKT48's songs, which are energetic all the time, are fun on stage, but I rarely hear JKT48 songs on the radio, because I'm also an announcer, so hopefully after this the song will be accepted by the public," he said.

3. The reasons why it took them 8 years.

Melody then explained why JKT48 had just released an original song after eight years.

"Actually, the request has been a long time. Maybe the first year is still not, because we still don't understand, what kind of idol group is that," Melody said.

As time went on, Melody and other JKT48 members learned to understand what was meant by an idol group.

Melody admitted that the desire to release the original single JKT48 had existed since the third year.

The woman born in March 1992 said, the greater desire after seeing sister groups like AKB48 have their own original songs.

To note, Yasushi Akimoto is the main founder of 48 Families.

In addition, they also want JKT48's original songs to be in Indonesian.

"And that certainly takes a long time. Maybe at that time there were many considerations that needed to be considered," Melody added.

Until one day finally JKT48 management got permission from Yasushi Akimoto to create an original single.

"Yes, it means allowed to bring the original song itself and the composer may be from the country itself. Finally this became the most beautiful gift for JKT48 in the eighth year," said Melody.