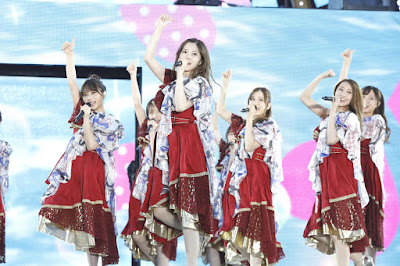 What will happen to Nogizaka46 after Shiraishi Mai graduated? Maybe that's the most asked question at the moment.

The Daily Shincho discussed the challenges that Nogizaka46 will face post Shiraishi Mai era. Whether or not they'll survive or disband.

Will it be like Morning Musume & AKB48 which decreases after their Ace left?

Some also said that Yasushi Akimoto tended to care more about groups he had just formed such as Hinatazaka46 and STU48.

Here's some of Japanese fans and music observers comments plus their views posted on SNS, etc.:

- "Morning Musume has songs like: Love Machine & Koi no Dance Site. AKB48 has Koisuru Fortune Cookies & Heavy Rotation which is known to all circles. While Nogizaka46 does not have a song like that, so it cannot be compared."

- "Nogizaka46 can't even be called a National Idol, is it over? It was never even started at first."

- "Shiraishi Mai is very influential but they still have other members. That is why they're doing re-generation. I doubt Keyakizaka46 will end their music career only because Hirate Yurina graduate."

- "Everything has its own time, it's better if Aki-P focuses on groups that sell and has a big value for the business thing."

- "In my opinion, Nogi has entered the second phase, such as AKB48 left by their senior changes to the era of Shimazaki Haruka, Kawaei Rina, Anna Iriyama, then there's Miyawaki Sakura, Matsui Jurina, and Okada Nana era. So it's a natural thing, doesn't mean it will go down right away but surely the times change, so he always creates new groups and innovates, but that doesn't mean forgetting the old groups because they can already be independent without his help."

Nogizaka46 member Shiraishi Mai has announced through the blog that she will graduate and the 25th single will be her last with the group.