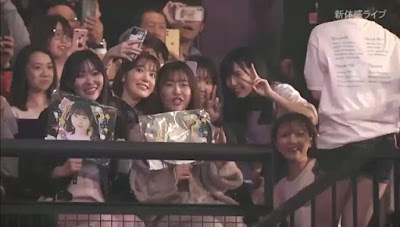 At the concert that night, HKT48 fans were surprised by the appearance of two members of IZ*ONE.

Miyawaki Sakura and Yabuki Nako were seen watching a concert of their original idol group in Japan, HKT48.

Both were seen in the audience bench with former HKT48 member Sashihara Rino.

It appears in the video taken by several fans on Twitter, it seems that Sakura and Nako are very happy to watch the HKT48 concert.

They were also seen taking photos together when HKT48 members arrived.

Seeing Sakura and Nako smile would certainly be an encouraging thing for IZ*ONE fans.

Fans are happy Sakura and Nako enjoying their trip in Japan, even though they were worried amid Mnet's PRODUCE series controversy weeks ago.

Earlier on January 17, Sakura and Nako were seen at South Korea's Gimpo Airport to fly to Japan. It seems like the two of them have scheduled themselves to watch the HKT48 concert today.