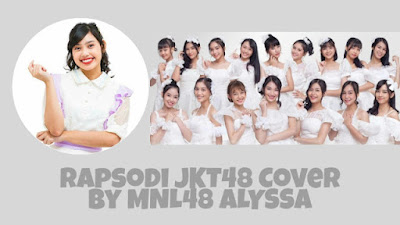 The AKB48 sister group in Manila, Philippines, MNL48, is indeed known as a group with diva-like personnel.

Their members often show their actions singing aka cover songs from AKB48 and other foreign musicians.

What if MNL48 members sing a song from JKT48's original single 'Rapsodi'?

It must be quite difficult isn't it for Manila girl to sing an Indonesian song?

One of MNL48 members Alyssa Nicole Garcia or Alyssa surprised fans by uploading a video of herself singing JKT48's Rapsodi song.

"This song has stuck in my head since I watched their live show on YouTube. This is truly amazing. Please support our sister group, JKT48 with their new song, Rapsodi! Their latest MV will be released tomorrow, January 22. You will falling in love with that song too, I swear, "wrote Alyssa MNL48 in the upload of the cover video.

Surely this has attracted the sympathy of JKT48 fans in Indonesia to glance at MNL48.