MNL48 Coleen gets popularity from TikTok 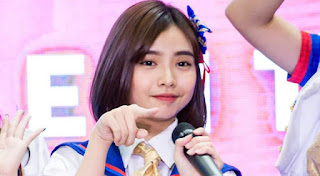 Coleen Trinidad, a member of Team NIV, was suddenly popular with Filipinos because of her uploaded video on Facebook.

Coleen uploaded a video on December 19, 2019 through her official Facebook page.

Unexpectedly the response of public was very good for the video.

Coleen upload video is the result video that she made herself with the Tik Tok application.

The video has successfully watched 5.7 million views on Facebook and has been distributed 183 thousand times.

Even this video is liked by Facebook users as many as 256 thousand likes.

From this post, the number of followers of Coleen's official Facebook page continues to grow to 300 thousand now.

Now other MNL48 members are also in the hobby of making Tik Tok videos to make them more recognizable to the Filipino people.