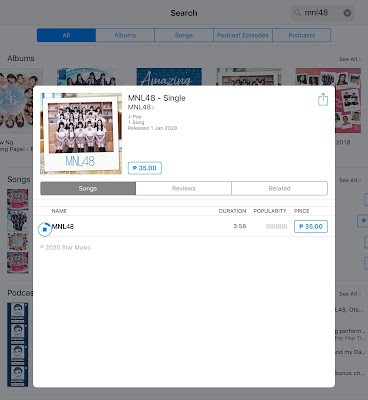 MNL48 fans have recently discovered something strange about their favorite group song on the Philippine iTunes platform.

They were initially happy because MNL48 had just released a song called "MNL48 (Manila48)" on the platform.

But after some fans played music footage of the song "MNL48" it was even confused.

The MNL48 song music is not sung in Tagalog as is usually performed by their favorite girls.

Instead the song was sung in Thai which belongs to the BNK48 sister group namely CGM48.

Sure enough the song uploaded titled "MNL48" actually belongs to CGM48 and sounds "Chiang Mai48" in the trailer.

The funny thing is the cover or cover of the song uses a photo from sister group in China 'AKB48 Tem SH'.

The photo is the cover of AKB48 Team SH's second single "So Long".

Although wrong, the song with the title MNL48 has also been registered with YouTube copyright.

On the automatic channel YouTube "MNL48 - Topic", this song has also been uploaded.

Where is this error not yet known, until now MNL48 fans have complained about this to management but have not yet received an answer.