MNL48 to compete with Blackpink, Red Velvet and TWICE

Manila idol group MNL48 was nominated in MREA music rank extra awards but they have to beat Blackpink, Twice and Red Velvet to win this one ... 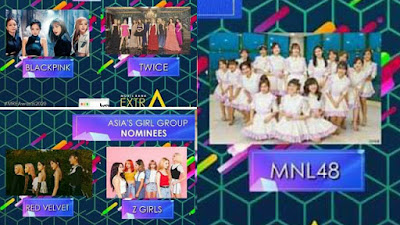 The Gabb and Co, group was nominated for the 'Best Asian Group' in the Music Rank Extra Award (MREA).

The MREA award was made online by an institution in the Philippines.

They focus on awarding KPop and Asian groups.

In 2020, the award began again and MNL48 entered into one of the nomination categories.

But unfortunately, MNL48 must have their toughest rivals from KPop groups like BLACKPINK, TWICE, Red Velvet, and Z Girls.

Until now, MNL48 ranks number 4 from the interim vote results. Deadline will end on the 5th of February 2020.