Comments: any idea how to watch the AKB48 theater show with Virtual Reality VR for international fans? STU48, NGT48, HKT48, NMB48, SKE48 are in too... 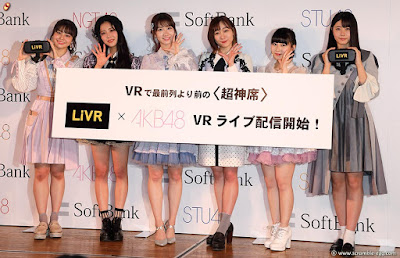 Surprising news came from the AKB48 Group, where in 2020 they got something extraordinary and became the first in the history of theater-based idol performances in Japan.

This will be the first time that AKB48 Group broadcasts on LiVR on a VR-based basis, fans will get experiences like watching live theater at the AKB48 Group Theater.

This VR-based theater show is not free, the fans charge 4500 Yen or around $43 - per month and can be accessed through their respective smartphones using the LiVR application.

Not only that, AKB48 Group Shop will also sell VR tools (docking for smartphones / supporting devices to watch) at a price of 4500 Yen and will get a bonus that is free access for a month.

Besides being able to buy equipment at the AKB48 Group Shop, fans will also get a free access bonus for a month, provided they already have the equipment and have subscribed to LiVR.