NMB48 Ota Riona to graduate from the group 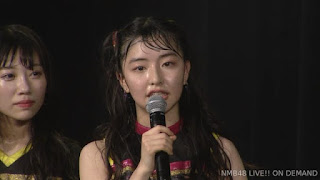 NMB48 member of Generation 2 Draft and Team N, Ota Riona announced their graduation from the group.

This was conveyed by Riona during the Team N "N Pride" theater performance tonight.

"I regret making this announcement because NMB48 changed in 2020. In the Yume wa Nigenai show, I was given the opportunity to become a center and be chosen to be promoted to be part of Team N. I was in NMB48 for a short time, but it was really valuable." , said Riona.

"I chose to study at university, the graduation performance was held at the N Pride show on January 26, 2020," said Ota Riona, expressing her reasons for quitting the group.

Her last activity as a member was at a handshake event on February 2, 2020.

Ota Riona is a member of the draft AKB48 Group as the first choice of NMB48 which debuted in January 2019.

She was just promoted to Team N in September 2019 but her career in the group was not long until he announced her graduation today.