Oom and Natherine explains why they graduate from BNK48

Two BNK48 members Oom and Natherine have announces graduation tonight, here is their explainations on why to grad from the group ... 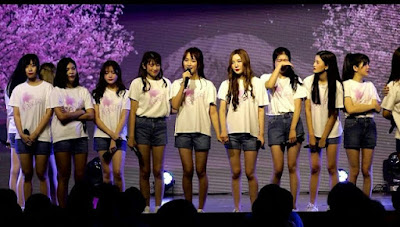 The two members are Natcha Krisdhasima (Oom) from the trainees and Dusita Kitisarakulchai (Natherine) Team NV.

Oom and Natherine says they did not participate in the BNK48 9th Single Senbatsu General Election.

As we know, sometimes members who don't participate are likely to decide to graduate from the group.

Oom and Natherine held each other's hands as they announced this to the theater audience.

"Thank you very much for one year and eight months at BNK48. This group taught me a lot. Life lessons, the world of truth, and many more. Thanks to this I can grow and grow stronger. I want to thank you for this experience.", Explained Natherine .

"I can meet all my friends here and many people I love. I am very happy to be here and have valuable experiences with you guys. Thank you very much for everything." Oom said.

Through her official Facebook account, Oom also stated that her desire to graduate from the group was already in her mind before the BNK48 Sport Day event back in September.

Both members said that they wanted to focus more on study because there were too many school assignments.

As you know, Oom is an international school student.

Natherine and Oom, who are partners in the second generation, will have their last activities as BNK48 members at the special single "77 no Suteki na Machi e" event on 15-16 February 2020.