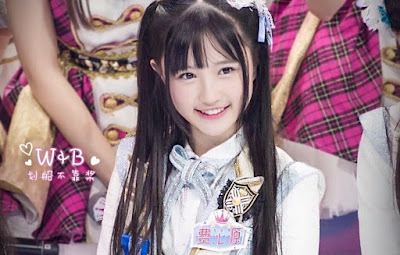 As we know, the AKB48 Team SH, the sister group AKB48 in China is in the survival event 'Qing Chun You Ni 2'.

Fans are looking forward to the scene where the members of SNH48 and AKB48 Team SH are put in a team for an evaluation performance.

The time awaited by the Chinese fans has arrived, the first show will soon be held.

Rumors about team division for trainees have been circulating on Weibo.

What if the members of AKB48 Team SH and SNH48 are in one group?

Like a dream come true, Fei Qinyuan SNH48 is rumored to be in a team with Hu Xinyin AKB48 Team SH.

They will also be with other trainees including Ai Yiyi, Su Qinrou, Chen Manxin, and Liu Haihan.

According to rumors, their team will be performing the song Wings of My Word, which was popularized by Taiwanese girl group "S.H.E".

Previously Fei QinYuan became the most talked trainee by Japanese fans than any other Produce Camp 2020 trainees because her beautiful face.