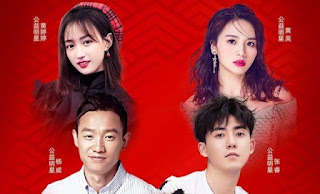 SNH48 fans are now being infuriated because of Huang Tingting's behavior. Today the Youku media platform announced a charity event to end poverty from 2020 in Sichuan.

Huang Tingting is one of the artists who will attend the event. In the poster uploaded by Youku, Huang Tingting did not use SNH48 next to her name.

This shows that she will appears without the approval of her current agency Shanghai Siba (STAR48). Even though the case for the termination of her contract with Siba had not been decided by the court.

Huang Tingting decided to leave and file a lawsuit for contract termination to the Shanghai law court back in December 2019.

STAR48 is unaware of this action and states that Huang Tingting terminated the contract unilaterally without negotiating. They'll do a further investigation.

All rights and trademarks in the name of Huang Tingting are still fully owned by STAR48 until the court decision. Now SNH48 fans are demanding STAR48 to send a letter to Youku for using of their artist without permission.

This will also be a strong evidence of STAR48 in court for breach of contract committed by Huang Tingting. Previously even, Huang Tingting was also present in the audience seat on the Mango TV show with a popular Chinese singer.