BNK48 2nd documentary changing it's title to "One Take" 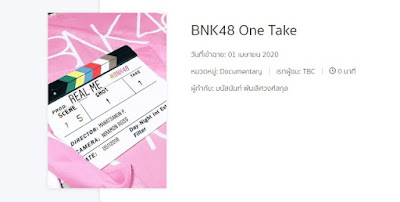 As we've previously reported, BNK48's second documentary film "BNK48 Real Me" will be released on February 20, 2020.

However, it seems that BNK48 and Salmon House as production houses have not been promoting this film.

Many suspect that the release of this film will be postponed because management is busy promoting "Thibaan x BNK48".

Recently a cinema site changed the profile page of the BNK48 Real Me movie.

In the Real Me page on the SF Cinema website, the date of release of this documentary has changed.

Planned screening in theaters scheduled for this month will go back on April 1, 2020.

In addition, Real Me underwent a change of title to "BNK48 One Take".

The reasons for this title change are not yet known.

He is an actor and film producer in Thailand.

One Take cinematography is handled by Niramon Ross, who is quite well known in the film industry.