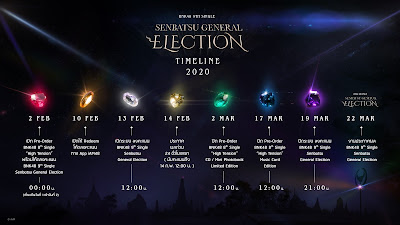 The candidates for the second general election "BNK48 9th Single Senbatsu General Election" have been prepared to wait for the opening of the vote site page.

In this election, their younger sister group in Chiang Mai 'CGM48' is ready to fight the seniors at BNK48.

Today through its official Instgram, BNK48 released the timetable of the schedule regarding the general election later.

Legally, the final general election concert was announced to be held on March 22, 2020.

In the schedule, general elections will begin on February 2, when the High Tension single pre-order has been opened.

Voting code will be distributed via the iAM48 application if you pre-order on 10 February.

On February 13th, fans were able to vote from the vote code that was given via the official general election page.

Interval of the day, the announcement of the provisional voting results will be announced.

On March 2, 2020, the limited edition version of the High Tension single pre-order will be closed.