BNK48 member Miori and Myyu will be a captain and vice-captain for Team BII for a while, here is why ...
As is well known that Pun and Jennis will undergo training in Los Angeles, United States for 30 days because they were both selected to participate in the BNK48 collaboration project training with Universal Music Group. 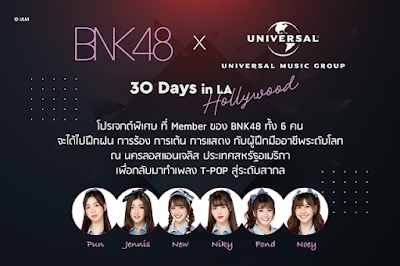 The six of them will be trained to sing, dance and act by world-class directors.

These 6 members will be sent to LA between March and April 2020 possibly after the SSK in March they will immediately fly to undergo the training.

The BNK48 x Universal Music Group project was announced during the 77no Suteki no Machi e handshake some time ago and the positions held by Miori and Myyu were the first team position after the shuffle and the formation of a new team.