The copyright price tag STAR48 bought from AKB48 is revealed

Shanghai Siba STAR48 was bought AKB48 copyright, license and royalty for SNH48 Group, now the price tag has been revealed by a fan ...
Despite being a former sister group of AKB48, SNH48 now still exists in China with the same name.

The group made by Shanghai Siba (STAR48) has produced hundreds of original songs after deciding independently from the AKB48 Group.

Although they have developed an originality business, SNH48 also retains copyrights for a number of AKB48 songs that they had adapted when they were still a sister group.

The 10th EP of SNH48 is the last single to include an adaptation song from Japan.

AKB48 theater setlist that has been adapted also reached 10 more types of performances.

Why is SNH48 still allowed to sing AKB48 songs?

The answer is simple, the copyright for AKB48 adaptation songs has been bought by SNH48 like JKT48 and BNK48 in their respective language versions.

A fan on Weibo revealed a copyright price for the AKB48 song that SNH48 had bought.

This started from posting a Weibo account called @QingHebot. 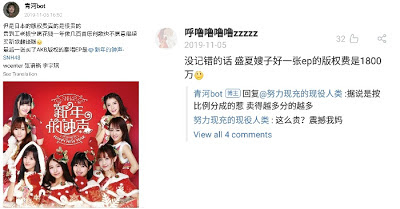 They uploaded a photo of SNH48's single with the last AKB48 song "New Year's Bell / Totteoki Christmas" which was released in late 2015 before the release of the original single.

"But indeed copyrights for Japanese songs are really expensive, so Wang Ziji (President of STAR48) prefers to produce hundreds of original singles in a year rather than continuing to buy adapted songs (translations)," wrote the account.

"If you remember correctly, the copyright fee for one single Manatsu no Sounds Good (盛夏 好 声音) is 18,000,000 Yuan.", Wrote a fan in the comment post above.

The price if converted to Indonesian currency at that time was approximately 1.9m GBP.

The price is considered very fantastic for a single consisting of 5 songs.

The Manatsu single itself was released on May 15, 2015 which featured 24 senbatsu members.

But the exact price of copyright is not yet known, because both SNH48 and AKB48 will not openly reveal this to public. This is also an expression of citizens on social media whose accuracy has not been proven.