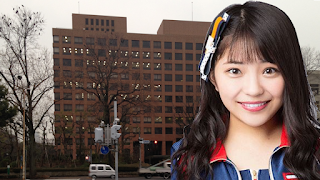 When you thought Yamaguchi Maho's assault case enough to send somebody from NGT48 to jail, unfortunately it didn't and will probably never happen.
Former SKE48, Yamada Juna is the first ever from 48 Group circle that sent to jail.
Few months ago, Juna who was graduated from the group in January 2019, with at least 3 of her friends were arrested by the police for allegedly being involved in fraud under the guise of giving advice for investment.
Yamada Juna admitted to fraud. And she is already the first former 48 Group member sent to jail. Whilst on the other news, prosecutors letting go former HKT48 Taniguchi Airi for having 0.025g of weird.
This issue made netizens linked it with the SKE48 song "Ii Hito Ii Hito Sagi" (Nice Guy Nice Guy Scam). Yamada Juna was also a senbatsu member in that song.