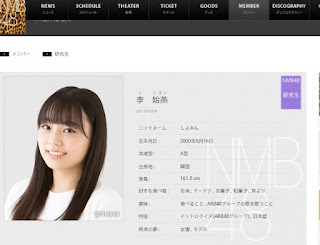 NMB48 has today announced their new member Lee Siyeon, a.k.a Shiyomin from South Korea.
She's auditioned for NMB48 7th generation in 2020 and make it to the final round but due to pandemmic, she unable to complete the final audition.
NMB48 give Lee Si-yeon another chance early this year for re-audition. And she passed that audition comfortably. Her official Twitter account is @siyo_min.
Shiyomin aiming to be at the top of the group, she has been practicing by herself as seen in a video released at NMB48's LIVE 2021 concert in Osaka Jo Hall.
Lee Siyeon is the 2nd member from South Korea to join AKB48 Group, the last time 48 Group having Korean member was SDN48, she is Jung Siyeon in 2011. SDN48 were disbanded the following year.