The winner of SNH48 Group 8th General Elections 2021 is Sun Rui. She is defeating her rivals, and leads her to Hall of Fame. Here full final results. 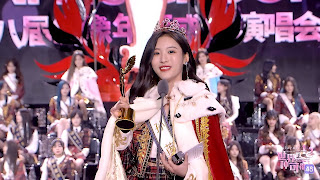 SNH48 Team SII member Sun Rui has successfully winning 2021 Elections campaign. SunRui got a total final votes at 3,123,409, beating Yuan YiQi at the runner-up with 2,603,049 votes.
Having won the SNH48 Group Elections means Sun Rui will graduate to the SNH48 Star Palace (Hall of Fame) before beginning her solo career as a STAR48 artist.
This will take place later this year. As FYI, elections rules state that if someone wins two years in a row, they get to move on to form their own solo studio.
And so far, two other members have entered the Hall of Fame: Ju JingYi and Li YiTong.
Congratulations to Sun Rui for winning the honor of TOP 1 in two consecutive SNH48 Group elections and becoming the third member to be promoted to the SNH48 Group Star Palace.
In the other news, SNH48 provide us some major announcements:
1. To celebrate SNH48 10th Anniversary, SNH48 will launch Beiwaitan STAR48 Cultural and Creative Park which will be the new Headquarters, when completed, it will be the largest idol-related Cultural and Creative Park in the world.
2. STAR48 will be renamed into SIBA Trend Creation and Branding Group. Under this group, it will contain STAR48, SIBA Visual Entertainment Co. Ltd. and Shanghai Mina Electronic Commerce Co. Ltd.
3. STAR48 will so to begin a new round of member recruitment for SNH48 17th Generation, GNZ48 and BEJ48 12th Generation and CKG48 5th Generation.