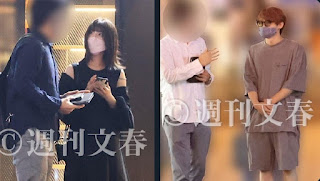 It is reported that Minami Hamabe (21) and Maruritoryuga's Ryuga (24) are dating.
They met about a year and a half ago, introduced by Hamabe's friend when they went to Maruritoryuga performance. It's said that the two soon started dating after.
Both agencies admitted that they were going back and forth between each other's house, but not dating, only close friends.
On June 6, Ryuga spotted with Hamabe's dog and bring it to her place.
When a reporter ask him, he said him and Hamabe Minami have dogs so he only help her to take care of her dog.
Hamabe Minami ranked 2 on Actor/Actress that high school girls currently paying attention, only behind Nagano Mei.