STU48 senior member Okada Nana to end her kennin with the group, Naachan will be back to fully focus on her AKB48 career. See what she said. 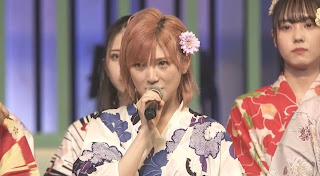 Okada Nana announced during STU48 Summer Setouchi Tour 2021 that she will end her concurrency with STU48 at the end of activity associated with their 7th single (released October 20).
The 23-year-old was captain of STU48 from formation in 2017 until January 2020.
Naachan says, "I think I will still be with STU48 until spring next year, so I hope I can create a lot of memories with everyone until then. Even if I'm no longer be a part of STU, we still belong to same 48Group. I will keep watching over you. STU48 is my treasure."
"I don't want to surprise other members so I have told them about this beforehand." she added.
Nana Okada will also take part of STU48's new 7th single "Hetaretachi yo" senbatsu member with Takino Yumiko back as a center. Naachan will also be a part of STU48 7th single Type A's coupling senbatsu.