Who is the most tallest KEP1ER member and also the shortest in the group? Find the answer here so interesting. 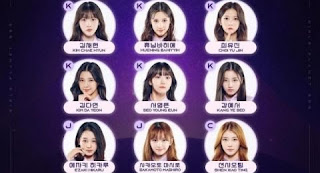 Who is the most tallest Kep1er member? Kep1er the new  South Korean girlgroup are set to debut.
Mnet's latest survival program, Girls Planet 999, has already aired the finale which will be broadcast live via YouTube and other sites.
The nine participants with the most points are announced and will debut with a group called Kep1er.
They are rumored to be promoting for 2 years and 6 months under Wake One Entertainment and CJ E&M Entertainment.
To get to know you better, here are the most tallest kep1er member to shortest you might need to know:
Shen Xiaoting- 168cm
Huening Bahiyyih- 166cm
Choi Yujin- 163cm
Kim Chaeyun- 160cm
Seo Youngeun- 159cm
Kim Dayeon- 158cm
Sakamoto Mashiro- 157cm
Kang Yeseo- 157cm
Ezaki Hikaru- 154.5cm
What's interesting here is Xiaoting actually the last one that is announced, she ranked 9.