Yuasa says without SKE48 there will be no Sakamichi

Hiroshi Yuasa former SKE48 theater manager said, without SKE48 then Sakamichi Series will not be exist. 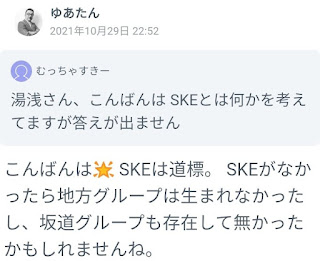 Hiroshi Yuasa who is known as a former SKE48 Theatre Manager asked by fans on his 755 account.
A fan asked him what is SKE48.
Yuasa says SKE48 more like a guiding ligjt.
He said, "if there is no SKE48 then there will be no other sister groups (NMB48/HKT48/NGT48/STU48), evem Sakamichi group (Nogizaka46/Sakurazaka46/Hinatazaka46) may never be exist."
Yuasa leaving SKE48 in 2019 to take role as a JKT48 Special Advisor.